If you have done auction drafts in the past then you already know how this works. If you are coming from a snake draft format then you are in for a treat. Instead of each team taking turns drafting a player, each team takes turns nominating a player to be bid on. This means that every team has the ability to get any player regardless of draft order. Want the best player in the draft? He’s yours if you’re willing to bid higher than everybody else.

Rookie Drafts begin in year 2 of your league. In your league’s first season all players, including rookies, are auctioned off in the Auction Draft. A Rookie Draft in your first season would give the teams at the start of the draft order an unfair dynasty advantage.

The Rookie Draft is a linear selection draft (not auction and not snake). Salaries are assigned to players based on their draft spot using a Rookie Pay Scale. All players taken in the Rookie Draft are automatically given a 3-year (length is configurable in the settings) contract.

*Note – All Rookie Picks are guaranteed. You don’t need cap space or roster space to make your rookie pick (although you will have to address it in order to make trades or to get players off the wire).

Contracts allow you to keep a player for multiple seasons. After your Auction Draft you will have the option of signing player’s that you just drafted to a 2-year, 3-year, or 4-year contract (or leaving them as a default 1-year contract).

This is similar to a keeper, but there are some extra characteristics of a contract that make things more interesting.

The player’s salary for year 1 (the current year) will be the amount that you paid for him in the Auction Draft. Each year when the season rolls over to a new year, players that you have under contract go up by 15% (configurable in league settings). If you drop a player that is under contract you will incur some dead money depending on how many years remain on their contract – learn more about this in the Dropping Players – Dead Money section. These factors make for a strategic risk/reward system. It is certainly risky to give a player a 4-year contract, but if that player ends up breaking out then you got a steal! 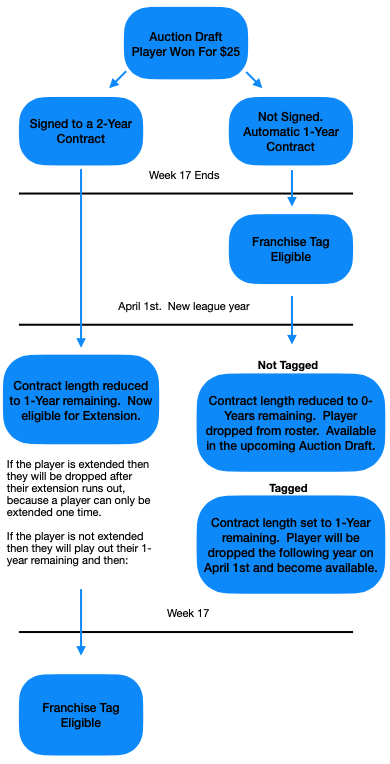 *Note – Some leagues will set Available Contracts to 99 each (unlimited contracts of each type), which also works fine. This works because there is a risk/reward with signing longer contracts. Just because you CAN sign everyone to a 4-year deal, doesn’t mean you should. The compounded salary increases of a 4-year contract and the dead money penalties provide a built in constraint. We don’t recommend this approach for new leagues.

You can only use an extension on a player one time.

Using an extension on a player allows you to sign them to a new 2, 3, or 4-year contract.

A player is eligible to be tagged if they just completed the final year of their contract and haven’t been tagged before. Tagging will be available in the app after NFL Week 17, when the fantasy season completes. The deadline to tag a player is April 1st, when these players will be dropped if they aren’t tagged.

The cost to tag a player is an average of the top 5 players at the position OR the player’s existing salary + 15%(annual salary increase setting), whichever is greater. Don’t worry, we display the tag amount for your tag eligible players on the Contracts screen for your team.

Use the “Reserved Cap” setting to make sure managers set aside a portion of the salary cap for in-season free agents.

The salary of a player taken in the Auction Draft is the winning bid amount for the player.

The salary of a player taken in Free Agent Blind Bidding is the winning bid amount for the player.

The salary of a player taken in the Rookie Draft is determined by the Rookie Pay Scale based on when the player was drafted.

A player’s salary increases 15% (by default, configurable in league setting) each year when the new league season starts.

When you drop a player two things happen, 1.) That player’s salary becomes dead money for the current season (you don’t get a refund). In addition, 2.) You pay a dead money penalty next season depending on how many years are remaining on the player’s contract. The default penalty setting is 25% per additional year remaining.

There are no additional cap hits after the following season.

What is Free Agent Blind Bidding

Free Agent Blind Bidding (also known as FAAB – Free Agent Auction Bidding) is how you pick up free agents through the course of the season. Your available budget is simply your available cap space. With a salary cap of $300 – If you spend $200 during the draft then you will have $100 left over for picking up free agents.

This is a blind bidding auction. You put in a bid for a player that no one in your league will be able to see. The next morning (depending on your league settings) the auction will process and whoever put in the highest bid for each player will have that player added to their roster.

When two teams bid the same amount for a player, the player will go to the team that is lower in the standings.

All players picked up during the season through the FAAB will automatically be assigned a 1-year contract with a salary matching the winning bid. This means that they will be released at the end of the season and available in the following draft. The only exception is if a Franchise Tag is used on the player after the season.

When a player is traded, their contract and salary goes with them and remains the same.

So, when making trades you should consider how much is the contract? How long is the contract? Are they eligible for an extension? Can you franchise tag the player? As you can imagine, trades are a lot of fun in salary cap leagues.

Trading is allowed year-round, except from the trade deadline through the final week of the season.

There are two options for approving trades in your league settings.

There are several playoff configurations that can be chosen in the league settings. One thing that is the same for all options is that we never play during the final week of the NFL season. This historically has been Week 17, but they recently added another week to the season and so it is now Week 18. The reason that you always want to exclude the final week of the NFL from fantasy is because NFL teams will rest their starters if the game doesn’t effect their playoff standings. The final week of the fantasy football playoffs is the most important game of your season and you wouldn’t want it to fall on the week that a bunch of starters aren’t playing.

Ties are pretty uncommon due to fractional points, but if there is a tie during the playoffs then the higher seed will move on to the next round. Seed is determined by the regular season standings, and so the effect is that the team that performed better during the regular season will get the advantage in playoff ties.

Practice Squad slots (Taxi Squad) are a powerful type of roster slot for your team. They are designed to give a salary cap advantage and additional roster space for players taken in the Rookie Draft that you don’t want to start right away. Only 25% of a player’s salary counts against your cap space when they are in a PS slot.

IR slots operate differently in Contract/Salary Cap leagues then you might be used to in standard formats. The IR slot is a special slot designed to provide cap space in exchange for not being able to use that player.

You can put ANY player in the IR slot regardless of their injury status and only 50% of that player’s salary counts against your cap space. The trade off is that the player must remain on the IR for the rest of the season, so you won’t be able to use that player again until the following season. This allows teams to use this slot strategically, instead of it just being an extra roster slot for hurt players.

Deadline – Trade Deadline. All trades must be accepted before week 12 begins

Rookie Draft – Rookie drafts can be on a separate date like this, or done back to back with the Auction Draft as one draft event.